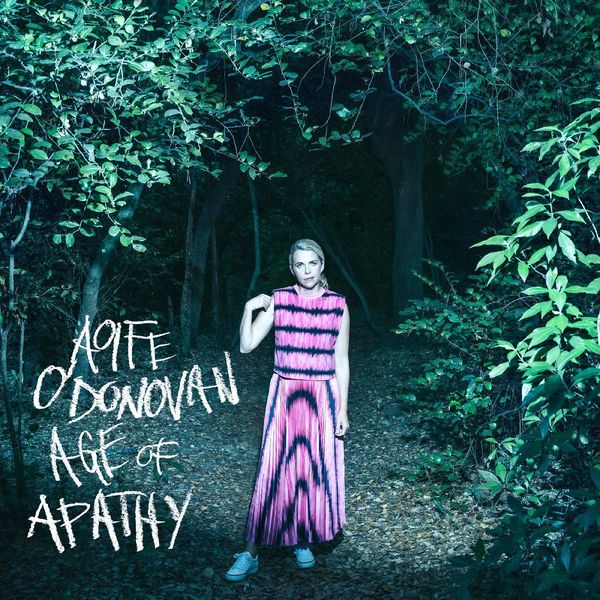 Grammy award-winner Aoife O’Donovan’s first solo studio album since 2016 was produced by Joe Henry and recorded at Full Sail Studios in Orlando, Florida. The co-founder of the trio, I’m With Her, continues her passion for collaboration on this album that includes guest appearances by Madison Cunningham and Allison Russell. The album’s singles include “Phoenix,” “Passengers,” and “Sister Starling.”

Considering how prolific Aoife O’Donovan has been—including with the bands I’m With Her, Sometimes Why and Crooked Still, and collaborations with Chris Thile—it’s remarkable that this is only her third solo album. Age of Apathy finds the folk-Americana poet and singer-songwriter contemplating the human condition, both global and personal. The verdict: There’s plenty to worry about, but plenty to be hopeful about, too. Spooky “Lucky Star” admits the defeat of “wherever you go, there you are” without rolling over for that exact cliché. (The narrator hoped a change of scenery would help, but discontent travels with us, be it to California or Boston.) It’s jumpy with restless drums, looming guitar and O’Donovan’s edgy vocals: The singer sounds like she’s teetering between being a nervous wreck and able to talk herself off the ledge. “If I had a little money/ I would go somewhere,” she sings. “Just a couple coin in the bottom of a mug/ Would make me feel like I’m almost where I thought I would be by now.” Meanwhile, “What Do You Want From Yourself?”is baldly existential, with O’Donovan longing for the happy-go-lucky freedom of childhood sledding; wavering Celtic harp is like the aural gateway to a dream sequence. She channels Ladies of the Canyon for “Sister Starling” (with its terrific Sisyphean line, “Apples and oranges don’t make lemonade/ but you press and you squeeze anyway”), the scene crystal clear until reed instruments sweep in like a moody fog. There are shades of Joni, too, on the sweetly jangling “Phoenix” and romantic “Galahad,” with O’Donovan singing, “I’m alive, I’m alive, I’m alive, I’m alive”—each affirmation like a pebble creating a ripple in a pond. On “B61” gently rolling piano and layers upon layers of O’Donovan’s voice paint a picture of Red Hook, Brooklyn, a trapped-in-time, once vibrant shipping-port neighborhood cut off from the world by expressways on one side and water on the others. It’s a place that could be desolate, but possesses a determined, take-it-or-leave-it charm—which is a pretty apt metaphor for making it work in pandemic times. (The title track is also highly evocative of New York, summoning both the collective confusion after 9/11 and the singular joy of driving out of the city.) And the wonderful Allison Russell lends harmonies on “Elevators” and gothic folk tale “Prodigal Daughter.” It all wraps up with the uplifting “Passengers,” a joyful melody buoyed by piano and bass and gleeful percussion. O’Donovan’s vocals slide like warm butter as she pokes at the meaning of life: “We are passengers traveling through the afterworld … and we watch galaxies collide/ My apathy is losing ground/ Open my mouth and make a sound.” – Shelly Ridenour